Framework Agreements can help suppliers to participate in national and large collaborative contracts where the framework is often divided into specialist or geographical lots.

A lot is where a procurement process separates a procurement exercise into smaller categories e.g. type of product or service, geographical location.

The value of the framework is the estimated value of all contracts (call offs) envisaged to be awarded under the agreement during its duration.  The total value of call offs made by buying organisations cannot exceed the total Framework Agreement value.

An example of a Framework Agreement is:

The Contract Notice published in Public Contracts Scotland, which advertises the new requirement, will confirm whether the Contract Notice is for a Framework Agreement, who is running it and the procurement processs who can use it.

Framework Agreements (and their resulting call offs) can be set up in several ways, dependent on the requirement and the market, as shown in in the diagram below:

Framework Agreements can take one of two forms:

Call offs from the Framework Agreement can be made in several ways:

The Framework Agreement has awarded the supply of differing goods and services to differing suppliers.  This can be done by awarding separate lots.  Much like the single supplier process, once the buying organisation has identified which goods and/or services they require they will then approach the nominated supplier(s) directly to purchase at the Framework Agreement terms (including prices).

The Framework Agreement ranks the awarded suppliers i.e. 1, 2, 3, etc. for supplying specific goods and services.  When the buying organisation wants to call off they will approach ranked supplier 1 (for the goods/services required) first to procure their requirements at the Framework Agreement terms (including prices).  Only if the supplier ranked number 1 cannot supply when required, the buying organisation will then approach supplier ranked 2, and so on.

This is where not all the terms or a procurement exercise are set out in the Framework Agreement e.g. it may not have agreed prices.  In this case the public body must run a mini competition (a new procurement exercise) between the suppliers that are capable of performing the proposed call-off contract.

Under a mini-competition the Framework Agreement suppliers will bid for the new requirement.  The call-off contract must be placed with the bidder who has submitted the best bid in accordance with the mini-competition award criteria.

It is important that suppliers understand that being part of a multi-supplier framework is not a guarantee of business - you may still have to compete and be successful in mini-competitions.

A Dynamic Purchasing System (DPS) is a process available for contracts for services and goods commonly available on the market. It has some aspects that are similar to framework agreements, but the Contract Notice will remain open throughout the lifetime of the DPS meaning that new suppliers can join at any time.

It has to be run as a completely electronic process, and should be set up using the Restricted Procedure and some other conditions.

Public Bodies may set up a DPS which may be divided into categories of goods or services.

The DPS is a two-stage process. First, in the initial setup stage, all suppliers who meet the selection criteria, and are not excluded, must be admitted to the DPS. This is assessed through the completion of an European Single Procurement Document (ESPD) by all interested suppliers.

Public bodies must not impose any limit on the number of suppliers that may join a DPS.

Individual contracts are awarded during the second stage. In this stage, the public body invites all suppliers on the DPS (or the relevant category within the DPS) to bid for the specific contract. 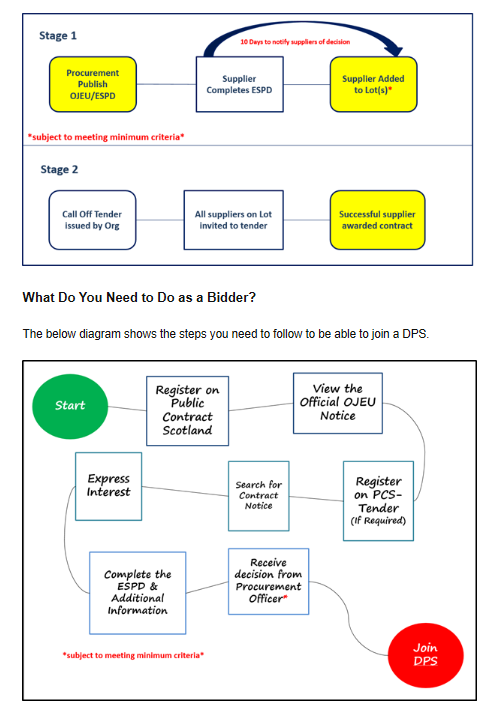 It is possible for a public sector procurement officer to “reserve” a procurement exercise so that the contract or part of it e.g. a lot or lots, can only be supplied by a Supported Business or Businesses.

A Supported Business is an organisation:

For a Reserved Contract all of the normal procurement rules apply, including being subject to all procurement legislation.

If a contract is to be a Reserved Contract then this must be stated within the Contract Notice.

If you are a Supported Business you can seek more advice from the following organisations:

Social Firms Scotland provide support for to organisations who create work for those who face barriers to employment.  They provide: information and advice; business development support; events and training; fostering collaboration.

Senscot supports the networking of social entrepreneurs, and are working to establish and maintain a support network for social enterprises.

An eAuction is an online auction where suppliers use internet-based software to bid against each other in real time against a published specification from the buying organisation.

eAuctions occur towards the end of the procurement process, after full evaluation of tenders have taken place. The procurement officer may conduct an eAuction based on price and/or values of features from the specification to identify most economically advantageous tender

Procurement officers will sometimes use eAuctions when:

An eAuction can be used in conjunction with:

An eAuction may not be used:

If a procurement officer intends to conduct an eAuction they will make that clear in the Contract Notice and details of the process will be included in the specification for the requirement.